Liverpool is a world city of international renown, with its instantly recognisable waterfront, unique accent and famous sons & daughters. Voted European Capital Of Culture for 2008, the parties and events have already begun. 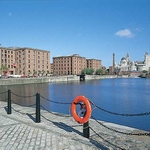 Based in the heart of North-West England, Liverpool is also Britain's favourite day trip destination according to the national tourist board.

The waterfront area attracts millions of visitors each year to admire the rejuvenated Albert Dock.

The city centre is packed with magnificent buildings and splendid architecture with a wide choice of cafes, bars, pubs and clubs.

Mathew Street, the home of the Cavern Club, still attracts thousands of Beatles fans from all over the world.

Liverpool is also a serious sporting city. Liverpool and Everton football clubs are renowned the world over, check their fixture lists. There is a cricket ground occasionally used by Lancashire County Cricket Club.

Liverpool is also home to the world's most famous horse race, the Grand National at Aintree.

Opened to the public in July 1971 by the 18th Earl of Derby, the `safari park' concept of having visitors in cages (cars) and the animals roaming free based on the drive-through game reserves of East Africa was unique.

The estate being only 8 miles (13 km) from Liverpool city centre, Knowsley was the first safari park to be built close to a large city.

In spite of some understandable apprehension about the possible problems associated with large numbers of animals (including lions) roaming about close to the city, the then County and District councils approved the proposals.

In the first two years of opening, the route through Knowsley Safari Park consisted of a 3½-mile (5.6 km) drive, and the main attractions were lions, cheetahs, monkeys, giraffes, zebra, elephants and various antelopes.

The park proved immensely popular, so in 1973 an extension, including a further 1½ miles (2.4km) of road, was built and opened. This allowed more animals to be added to the collection on display along the now 5-mile- (8 km) long route, including herds of camels, buffalo and white rhino as well as a group of tigers.